betfair has the hightest odd (3.30) so far the highest odds for a an away win for Avispa. The two teams never met in the last 5 years.

Omiya Ardija recently lost a duel 5:0 against Ryukyu. The home team has won 6 out of 16 matches in the recent six months. Ardija had four victories, two draws and one defeat at home. In the current season, Ardija won 57.14% (4 out of 7) of the matches in their own stadium. 1 times it was enough to score one point, while 1 times the guests took all points. After a total of 17 games in the season, Ardija has seven victories, three draws and seven defeats.

In the first half, coach Takuya Takagi's team can score more goals on average. Ardija's current record shows an average of 2,29 goals per match at home, of which 1,29 are their own goals and 1,00 are goals scored against them. In the current season, home matches most often end 1:0, 1:1 or 1:4.

Avispa last won 0:1 against Yamagata. This season, the team has been successful 4 out of 8 away games so far (50%). In the past 6 months, Avispa has won six matches, four matches ended in a draw and four games were lost. Avispa managed to win three away victories. The team lost two matches in the foreign stadium and in two matches the teams separated with a draw.

Fabio Pecchia's team scores 0,88 away goals per game this season, mainly in the second half-time. Overall, Avispa scored an average of 1,63 goals per away match. In the current season, Avispa's away matches have usually ended 1:0, 2:2 or 0:1.

Betting tips on Ardija vs Avispa

1,5 goals is the over/under average for both teams. The matching bet would be an Under 2.5 goals, for which you currently get the best odds 1.57 at betfair. The bookies assume that a maximum of one team will score. The odds against 'both teams to score' are 1.73 (betfair).

In the next upcoming matches Ardija will have to deal with Mito Hollyhock, Tokushima Vortis and FC Machida Zelvia. Next on the schedule of Avispa Fukuoka are matches against FC Ryukyu, Zweigen Kanazawa and Thespa Kusatsu Gunma.

other Previews for Japanese J2 League 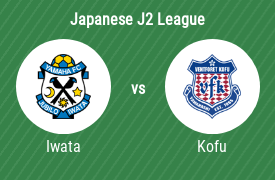