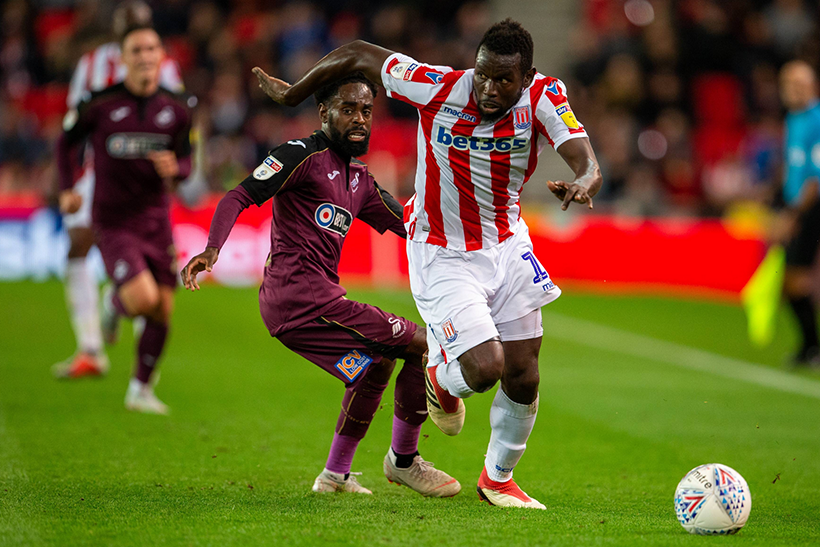 Stoke will welcome Norwich in the EFL Championship on 24.11.2020. The duel will start at 20:00. Britannia Stadium is the arena where the match is taking place on Tuesday. So 3rd place side in the table is guesting at the actual 8th place side. At present, the bookmakers see Norwich to be the winner. The best odds for an away win are currently offered by Unibet at 2.50. A tip of 10€ will result in a win of 25,00€ (equals 15,00€ profit).

William Hill has the hightest odd (2.90) so far the highest odds for a a win for Stoke. The forecasts of the betting providers show the following probabilities: Win for Stoke 36%, win for Norwich 40%, tie 30%. When the two teams duelled last, they separated in one game with a win for Stoke, one match ended in a tie and in zero matches Norwich was the winner.

Stoke City FC won its last duel 0:3 against FC Reading. The home team has won 9 out of 20 duels in the past six months. The team has had five wins, two draws and two losses at their home stadium. Stoke has managed to win 2 out of 5 home games (40%) in the current season (20/21) so far. Two games ended in a tie and one match was lost at home. After a total of 11 matches in the season, Stoke has five wins, three draws and three defeats.

More goals are scored by Michael O’Neill’s team during the first 45 minutes of the game. Stoke currently achieves an average of 1,40 goals per game at home and receives 1,40 goals. This results in a total of 2,80 goals per game. A look at last season’s goal record shows Stoke City FC at home with an average of 1,57 goals. The average number of goals conceded per home match is 1,13. In front of their own fans, the team’s games mostly finished 2:0, 0:2 or 1:2 last season. In the current season, home matches most often end 1:0, 3:2 or 2:2.

Norwich recently won 1:0 against Swansea City. The team has been successful in 3 out of 5 away games (60%) so far in this season. Norwich has won six matches and lost two games in the last 6 months, with three games ending in a tie. Norwich managed to win three away victories. The team lost one match in the foreign stadium and in one game the teams separated with a draw.

Daniel Farke’s team scores 1,40 away goals per game this season, mainly in the second half-time. When Norwich plays in front of foreign fans, there is an overall average of 2,20 scored goals per match. Last season, Norwich played away with an average of 0 goals for and 0 against in their away games. In the current season, Norwich’s away games mostly ended 3:1, 1:1 or 2:1.

Betting tips on Stoke vs Norwich

Considering the over/under average for both teams of 1,5 goals, an Under 2.5 goals result is likely. The best odds on the market for this bet is currently 1.80 at bet365. A look at the goal record of both teams indicates that both teams are scoring. We recommend BTTS Yes to the current best odds of 1.79 at Unibet.