On 17.02.2020, Bochum and Stuttgart will cross swords in the German 2nd Bundesliga. The referee will get the game underway at 20:30. The game brings together the team presently in 14th against the 3rd of the table. Currently, bookmakers lean towards an away win by Stuttgart. The best odds for an away win are at present offered by 1xBet with ​​1.89. A bet of 10€ will result in a win of 18,90€ (equals 8,90€ profit).

For bets on the Bochum bet365 provides the best odds so far with 4.20. The predictions of the betting providers indicate the following chances: Win Bochum 24%, win Stuttgart 55%, tie 28%. In the last direct comparisons, Bochum managed to win zero matches, and two games ended in a tie. Stuttgart won one game.

the VfL Bochum won the last duel 0:1 against the Wehen Wiesbaden. The hosts were able to decide 5 of their 19 games of the last 6 months in their favour. After a total of 21​​ matches in the season, the Bochum now has five victories, eight draws and eight losses to their credit. The team has had three victories, five draws and two defeats at their home stadium. In the current season, The Bochum won 27.27% (3 out of 11) of the matches in their own stadium. 1 times it was enough to score one point, while 2 times the guests took all points.

​In the first half, coach Thomas Reis' team can achieve more goals on average. the Bochum currently scores an average of 2,18 goals per match at home and concedes 2,00 goals. This results in a total of 4,18 goals per game. Last season the VfL Bochum scored an average of 1,71 goals in their own stadium and had to accept 1,29 against.The most common results at their home stadium last season were 1:0, 1:3 or 2:1. In the current season, home matches most often end 3:3, 2:2 or 1:3.

In their last game, The Stuttgart won 3:0 against the Aue. The team has been victorious in 2 out of 10 away games (20%) so far in this season. The statistics for the past 6 months show ten victories, four draws und five defeats. In games in the foreign stadium two wins were achieved. Three games were lost while four matches ended without a winning team.

​1,30 away goal scored the eleven of Pellegrino Matarazzo on average this season, most of these were achieved in the second half time. When Stuttgart plays away, there is an overall average of 3,00 scored goals per match. Last season's statistics show the Stuttgart scoring 0 goals per away match, while there were counted 0 goals against the team. In the current season, Stuttgart's away games mostly ended 1:1, 2:2 or 1:2.

A look at the goal record of both teams leads to the conclusion that both teams score. We recommend BTTS Yes to the current best odds of 1.57 at 1xBet.

Betting tips on Bochum vs Stuttgart

Considering the over/under average of both teams of 2,5, an Under 3.5 is likely. The best odds on the market for this bet is currently 1.58 at Unibet.

The bookmakers think a 1:1-tie is the most likely, currently estimates the highest odds at (888Sport​ 7.50​. The second most probable for the bookies seems to be a 1:2​-the win for Stuttgart's, for which you can currently get the best odds of 8.50​ at bet365​.

other Previews for German 2nd Bundesliga 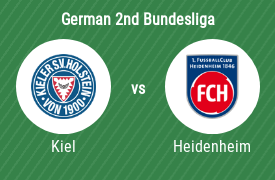